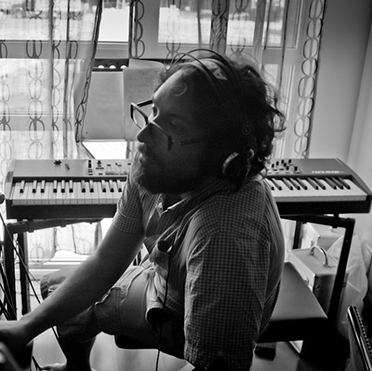 Robbie Grunwald is a Toronto based keyboardist, composer, and producer.  He has been performing in the Toronto music scene for over 18 years with many of Canada’s prominent songwriters (Jill Barber, Donovan Woods, David Myles, Doug Paisley) and bands (Diana, DoubleTooth, Kate Rogers Band), and appears regularly as a session player with many celebrated  Canadian producers (David Bottrill, Chris Stringer, Les Cooper, Andre Wahl, Joshua Van Tassel).  He has acted as musical director for various bands (Donovan Woods, Sunday Night Live) and theatre productions (Monster Theatre, Todd’s Lunch The musical), and has been working as a composer since 2002.  His compositions have appeared in film, theatre, video games, and commercial settings.  Most recently, he is becoming a sought after arranger and producer.

This diverse resume has put Robbie on stage at some of the most prestigious festivals and venues including: Massey Hall, The Glenn Gould studio, The 2015 Pan-Am Games, the 2010 Vancouver Olympics, the Montreal Jazz Festival, The Blue Note Tokyo, Teatro Lloseta in Mallorca Spain, the Ashkenaz festival, Montreal’s Places Des Arts, Torino’s Spazio 211, the Kill Your Pop music festival in Dijon France, and The North York Centre for The Performing Arts to name a few.

Robbie started his piano studies at the age of six progressing through the Royal Conservatory of Music curriculum.  He Attended the NMC jazz camp in 1992, where he participated in workshops and master classes with Canadian Jazz musicians including Alex Dean, Phil Nimmons, Kevin Turcotte, Gary Williamson, and Mark Eisenman.  He went on to study jazz performance and theory with Mark Eisenman, and studied composition with George Thurgood at the Royal Conservatory of music.  Robbie subsequently completed his PhD in Theoretical Chemical Physics at the University of Toronto between 2002 and 2008 while maintaining an active career in the music scene.